These Customers Converted to Geothermal and Saved

There’s no question: geothermal systems are the future when it comes to more affordable, green energy in Ontario.

Geothermal systems use ground source heat pumps to extract heat from the earth, which stays at a constant temperature even on the coldest winter days. In the summer, this process reverses.

One of our ATEL Air customers, Jeff Goodman, shares his experience of owning a Geothermal System. Not only is he saving money but he’s still able to consume the same amount of energy he’d be using with oil systems.

A Healthier, Happier Home Environment Thanks to Geothermal

Dr. Gerry Rosenquist was the first obstetrician in Morrisburg and the surrounding areas, and he and his family have lived there since 1960.

They had five children, lead active lives in the community, and were always concerned about being kind to their health and the environment.

“We started with electric baseboard heat in our house, but it got so expensive. When we built our 4000 square foot house in Iroquois, I wanted something different,” Gerry explains.

The Rosenquists Save 40% on Heating with Their Geothermal System

“It’s cheaper than gas or oil heat or electric baseboard heaters. Our electricity costs average about $400 a month and about half of that is for cooling and heating,” Gerry explains.

“Oil heat would be 40% more, and conventional air conditioning would double our cooling costs.”

The savings are a nice bonus for Gerry and the rest of his family who use geothermal systems in their own homes. 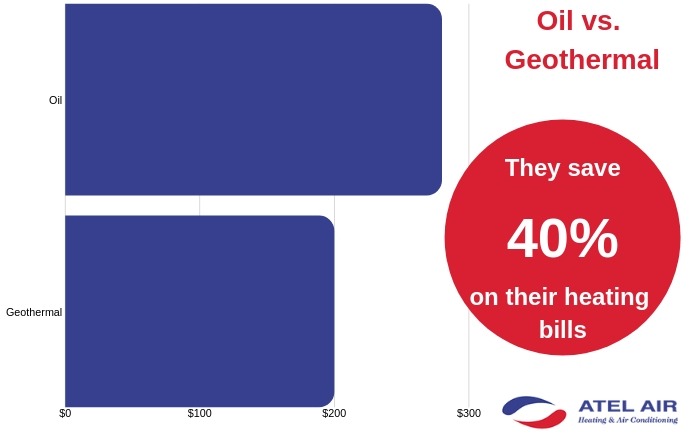 This option best worked for the climate and Gerry’s property, and means that none of the system is exposed to the elements or at risk of freezing. It also requires very little maintenance.

“Geothermal is healthier than oil or gas, and I always thought geothermal provided the best heat and was the most energy efficient. It was also the least expensive,” Gerry says.

Geothermal is Better for the Wallet and the Environment

Mike Ault is an egg, dairy, and cattle farmer from Hanesville, Ontario, and has spent most of his life there.

We were able to help Mike make the switch from an electric furnace and install a geothermal system in his 934 square foot home in 2008. 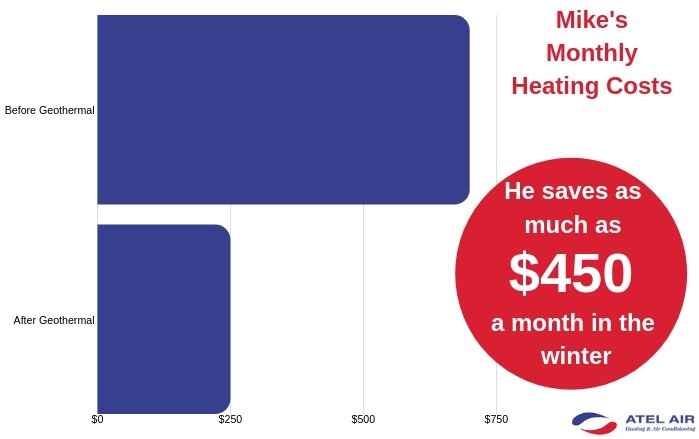 We offer a financing program that makes geothermal more attainable than ever. Your payments will roughly equal what you’ll save on your utility bills each month, and the system pays for itself after 10 years.

The geothermal bed will last between 25-50 years, and the heat pump will last 20-30 years. This is perfect for Mike, who plans to stay in his home a long time and continue to enjoy the savings.

“I have no regrets. It’s a lot less than the alternatives,” Mike says. “ATEL did a good job, nice and neat.”

They actually did the work for less than quoted. I would have ticked timeliness as well but it did take awhile as this is probably their busiest time of the year and we were not available at all times. They were very good to try and work around our schedule.

Just wanted to let you know the unit is working great. I even think it is blowing better then it did before.
Anne and I am really impressed that you and your team got this resolved quickly. You even came out first thing in the morning to get it repaired… Talk about customer service!!!

We appreciate how quickly your company was able to accommodate us and rearrange your schedule to install the water heater. It gave us peace of mind knowing that CO3 wouldn’t be backing into our home.